With bleached blond hair, and an abundance of safety-pins, I honestly thought I looked mean and scary and tough.
I swaggered around the estate drinking beer and smoking both cigarettes as well as dope, and I felt like someone important, someone to be feared . . .
. . . but I was nothing more than a kid with the wieght of the world on his shoulders.

I wanted to be different, to stand out from the crowd, but most of all, I wanted to mask how I felt inside.

During my teens mum wasn't always in the best of health, (I often wonder if my behaviour played a part in that), and she was often in hospital. 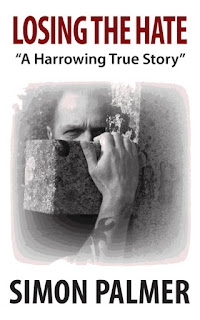 During these times, dad would run the home; cooking us all dinner, shopping, and doing the other mundane tasks that helped to keep a home in order.

he asked me if I intended on visiting mum on an occassion when she had to have major surgery, "No" was my rude but simple reply.

I had to go to Stuart and karen's, and I didn't want to make Stuart angry by not turning up.

Stuart was a middle-aged man who, along with his wife, forced me to have sex with them - night after night.

I couldn't tell my dad this, and so I pretended to be an uncaring yob - when truthfully - all I wanted to do was visit my mum.

At fourteen, I should have been laughing and joking and having fun - but instead I was merely wandering around like a teenage zombie - lying to the world about how I really felt.

The abuse I was being subjected to by Stuart and Karen, (along with the teacher at school), were not just abusing me, but my entire family.

Eerytime I was toched by these people, they were not just interfereing with me, but my mum and dad too.